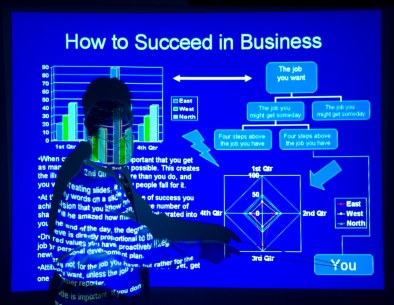 Image films are not only used on the Internet and on trade shows. An image film also works very well prior presentations and lectures, in order to touch the audience emotionally. Video formats of high quality, such as 1080p recorded in AVC Intra 100, look gorges when shown by a beamer. (Picture: ©iStockphoto.com/David H. Lewis)

An image film is an advertising techniques used to promote your enterprise or company with. It is not really important for the design of your image film if it is intended to be used on a fair, trade show, at the beginning of a lecture opening or on the Internet. An image film represents your business with your products and services.

Prior production start it is important to keep an eye on your target group. On fairs and within lectures you are likely to have a different clientele than on the Internet, where a broader audience is present. An image film is an advertising film – however, advertisement is kept discrete. If you give a video production in order then you get the best price performance ratio, if you allow the production of several versions. This enables you to present longer and technically high-quality production on your trade shows and the shorter version on the Internet. An image film can also be merged within a PowerPoint presentation. This allows you to touch your audience emotionally prior your lecture.

Your image film represents your business. It doesn’t matter which style you choose (this is often a question of personal flavour as well) – if your image film is done unprofessionally then your business looks the same. Nothing is more embarrassing than a bad-made hobby video on your web page. A simple but technically professionally produced image films cost for instance by 3000€ (entry level). More complex shooting needs, professional voice-over artists and license rights for suitable music, different country versions let the production costs easily shoot over the 10.000€ border. If you have a smaller advertising budget then you might consider using good photos, which can be animated also as Adobe Flash. Well-illuminated photos work often more professionally than videos, which were produced with low-priced cameras and without professional lighting. Production costs can also be reduced if the client prepares the appropriate preliminary work, such as text.

The simplest form of an image film is a video collage. Here, suitable picture sequences, with which the image of the enterprise is represented, are edited in form of a collage. Appropriate music and the embedding of writings complete the film. The collage style has the advantage that a voice-over artist is not necessarily required. Multilingual variants just require the embedded text to be translated. Even though it requires courage and it might not be suitable for everybody but the authenticity of the film increases if you as an executive represent your business personally. Good film production companies employ normally producers, which have professional voice-over training and can coach you on the set.