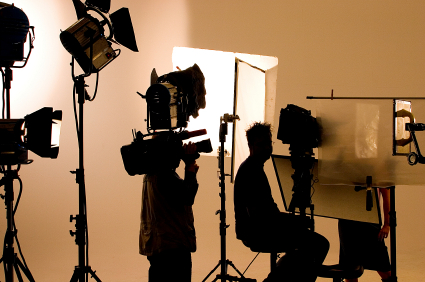 Simple TV-Spots with one actor, a voice-over artist and proper music can already be realized at 40.000€. The main cost driver for TV-Spots are always the licenses fees. (Foto: ©iStockphoto.com/Tim Lecomte)

The duration is short and the costs above the cutting edge – the production costs of advertising spots, also labelled as TV-spots, are comparably high and close to the expenditure of cinema productions. The single transmission of an advertising spot in Germany cost between 500-4000€. Marketing campaigns request transmission of a TV-spot for at least 200 times, which result in total transmission cost between 100.000 to 800.000€ . This estimate is at the lower limit because many advertising spots run more frequently – and not only on television. Such high transmission cost require the message to be wrapped within 15 to 30 seconds in such an efficient and technically-perfect manner that TV-spots belong to the most expensive and complex productions at all, with a common budget of 150.000€.

A TV-Spot for less Money

However, TV-Spots can also be managed with less money. Small television stations on the regional market provide transmissions at lower rates and within this low-budget segment simple productions with a production value of 10.000€ are realized. Such productions consist often only of animated text. Simple advertising spots with an actor, a voice-over artist and reasonable music can be realized for about 40.000€. The cost driver by TV-spots are the royalties fees for the actors, voice-over artists and music. If an actor is performing within an advertising spot then other companies are less likely to provide additional contracts – at least for the time period of this spot. An actor cost in Germany between 800-1200€ but the royalty fees for a European or international „buy out“ are several times the daily rate. For example the world-wide „buy out “ for international broadcast purposes is about 3200% of the daily rate. If advertising spots are also used in a different manner, then the license costs rise.
The rights of use for advertising spots are usually cleared for a year. Fees charged are legitimate because hardly no other company is going to book an actor without exclusivity agreement.

It is important to state that the terminology „buy out“ is used in Germany differently than it is in the US. In the US it is common business practice to have a statement with the phrase „complete buy out“ in the contract. In Germany it is legally not possible to claim all rights and „rights of use“ required to be purchased need to be specifically addressed in a proper written manner.

Even though small advertising spots can be produced for a reasonable amount of money by many production companies – the market for larger advertising spots seems to be dominated by larger studios and marketing companies. If these large transmission cost claimed by the TV-Stations and production costs associated can still be justified in the near future can not be taken for granted. Simple, well made and smart on-line videos on YouTube nowadays reach a bigger audience.