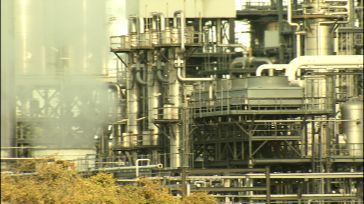 The term industrial film or industrials is already older and today the expression corporate video is also used. Corporate videos are traditionally facilitated for industrial safety and for the documentation of in-plant processes. To that extent the industrial film differs from the advertising film, which aims to target a broader audience. Corporate videos can also make a contribution to prevent accidents by demonstrating the correct handling of machines and illustrating sources of danger. Industrial films can also reveal the correct behaviour in case of accidents, for example the use of an emergency shower during acid burns. Corporate videos are used to document in-plant processes or procedure, for example the production of pharmaceutical or chemical products. Such documentations are frequently used for training purposes. To that extent the industrial film illustrates similarities to the training film or also called instructional film. Similarities are also evident to a trade show video. Companies, which for example install plants, often show the installation process for advertising purposes on trade shows. The terminology corporate film is facilitated for a whole group of film productions conducted for the corporate world. To draw an academic line – the targeted audience is rarely the general public.

Unfortunately, there are also exceptions. Corporate-TV in some case targets the general public but this will be discussed in a different article. Corporate videos are also not just purely technical or of scientific nature. During the last years corporate videos were heavily used in order to address sociological topics by emotional terms, such as environmental protection. These films certainly serve to manage a public image. However, they are not just image films. Corporate videos aim to provide information – for example to visitor groups. The public relations portion is usually less then 25%. In case the corporate video has a length of 8-10 minutes then the public relations part rarely exceeds 2 minutes. We need to keep in mind that these corporate videos for visitor groups are really niche products. However, with the introduction of cheap flat screens similar type videos are increasingly shown in waiting rooms.

Industrial films for training purposes can be longer than 8-10 minutes, independently if the need to address industrial safety or just address documentation requirements. Particularly, if you want to illustrate several aspects then the creation of an interactive DVD or BlueRay is the way to go to. Here you can mark the desired scenes by the use of the menu function and show them rapidly during a presentation or a lecture.

Industrial films rarely pay for expensive license costs of music or actors, i.e. GEMA free music is here completely sufficient. However, the production of industrial films is time-consuming. Each individual process step should be scripted in advance and filmed precisely and consistently – the artistic translation is as well not of mayor importance. The mayor cost driver for such films are therefore (i) the final length and (ii) the number and type of sets. 10 minutes usually start at around 10.000€ and 1000€ for every additional minute. Costs obviously rise with complex shooting requirements, the use of special cameras and animations. Some companies quote that the production cost can be significantly less if cheaper equipment is used. But that’s nonsense because the mayor driver of the production cost is the time and not the type of camera used. Clients should expect for the above stated price television quality. It is favourable for the quality of the film that the producer has a scientific or technical background. This also helps in order to process the film work much faster. Industrial films have a long shelf life. Even today, old films (and I mean physical films) are still used for certain training purposes because some processes have never changed. If you consider a production of an industrial film this factor needs to be considered because it requires (i) the rights of use to be cleared sufficiently and (ii) to facilitate a technology, which allows you to reuse film sequences in couple of years time in other productions.